Confessions of an adaptogen junkie 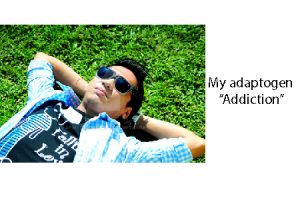 For the last two weeks, I have refrained from taking Recharge, which has 40mg of the same astragalus-derived adaptogen that I had taken from 2007-2009 and then 2010-2013. This is my first voluntary break in nearly ten years!

In total, I have taken this compound daily for 8 1/2 out of 9 1/2 years with no other vitamins, medicines, antioxidants, fish oils, or supplements. I would like to compare and contrast what life feels like with and without adaptogens and summarize the cumulative effects upon me.

I have had atopic dermatitis (eczema) since childhood and for the last two weeks, this has been flaring. I attribute this to a functional increase in stress.

While taking an adaptogen, I never wake up with muscle soreness. I do yoga daily but in the last two weeks, I have carried around aching muscles, which is something that I had forgotten can occur. The repair of muscles and ligaments is very efficient as explained in this podcast.

While taking an adaptogen, I get more sleep because I need it as explained in this blog where I argue that sleep ontogeny recaputlates sleep phylogeny.

Since stopping the RECHARGE, it has become difficult to get more than 8 1/2 hours of sleep and indeed I tend to wake up after 4.5 or 6 hours.

As a result, my general mood is less happy and my concentration is lacking. The feeling of being the the present moment is diminished as I feel my attention is fixated in the past and the future (which can manifest as regret and anxiety if unchecked).

Last month, I was carded for alcohol, and this happens several times a year. I’m not kidding myself though. I look and feel like a guy in his 40s despite turning 50 this summer. I don’t have more than a dozen grey hairs on my head (although I used to have more as a 39-yo). I used to have problems with accommodation (reading at arm’s length) but now I can read 12 inches from my face. I have occasionally long arm or body hairs, a phenomenon first pointed out by the Harris twins in this podcast on epigenetics.

I don’t have any actinic or seborrheic keratosis, a sign of skin aging. My head hair distribution is the same. My nails grow strong and fast and the dark streaks and white spots are gone.

And, I haven’t grown any horns or a vestigial tail- so that’s good.

I don’t do resistance training. My only injury in the last 9 years was a bucket-handle right meniscus tear associated with severe pain. I was close to having arthroscopic surgery for excision of this hanging piece but it must have reconnected because I am pain free now. Demineralization around one childhood filling of a molar has let to dental abscess occasionally but since I couldn’t get a dentist to fill it in without a root canal, I treat it with “benign neglect” and have only a flare about once every month.

Finally, I have had no clinically-recognizable cancers. I qualify that because I, like everyone, get sub-clinical cancer all the time. The truth is that cancer is like hotel fires. 99.9% of hotel fires are put out by the person who started it and rarely require a fire extinguisher or the fire department. Rarely, does a potentially misbehaving cell produce in an MGM Grand style conflagration in you.

As shown in the below illustration from my book, Telomere Timebombs: Defusing the Terror of Aging, first line of defense is cell suicide, then the immune system. Rarely does cancer overwhelm the host unless there is immune compromise. Last year, I had unexplained bloody urine and a 1-mm bump on my mid-urethra which have subsequently gone. Was is cancer? Not according to a highly sensitive test.

Read the comments on this blog if you want to wrestle with the serious problems of subclinical “cancer” detection that led to a lot of potentially needless suffering in one client. So why did I stop? In the past, people have asked me if they should take a break as the packaging suggests and I generally told them I didn’t believe it was necessary.

About two weeks ago, I had a scare with my left eye. Over the years, I have noticed a change in the optics of my left eye which was corrected from -8.25 diopters to 0.0 by Lasik 18 years ago. I attributed this to a reversion to a “younger” eye shape and it probably measures about -1.00 now. More concerning with a family history of glaucoma as a subtle loss of color saturation in the left retina which could be attributable to high pressure, macular degneration, or something else.

After rubbing my eyes hard during yoga, I had an acute decrease in vision, redness, tearing, and referred pain and headache. I thought I might have caused a mechanical trauma leading to an acute angle closure. It scared me so I decided to stop Recharge and coax some cell death. I tried to fast for 14-18hrs a day and took quercetin and curcumin to help in the destruction of damaged cells. For whatever reason, it seems to have helped.

With the benefit of “hindsight”, I speculate that I really had three issues. 1) myopia from change of eye shape (years), 2) acute angle closure which probably would have resolved on its own (episodic), and 3) some macular dysfunction (during the last nine months). I suspect the last problem may be attributable to increased survival and decrease turnover of retinal pigment epithelial stem cells. In these last two weeks, my color saturation and brightness has nearly equalized for both eyes.

In conclusion, for most people, the benefits of uninterrupted telomerase activators appear to outweigh theoretical risks. But in the case of an acute situation, felt it was necessary to invoke the god of destruction, Siva, and cause some apoptosis and autophagy.

Now that my visual problems are resolved, I am going to resume Recharge. Will it increase the quantity of my life? Assuming it is allowing the bone marrow stem cells to deplete more slowly, then yes. What I do know, like so many of my patients that take adaptogens, is that the quality of my life will improve as the improved sleep, exercise recovery, mood, and focus will be welcomed back into my life.

Taking adaptogens are not directly psychotropic. But if you sleep better and are more present, you just enjoy living a whole lot more.