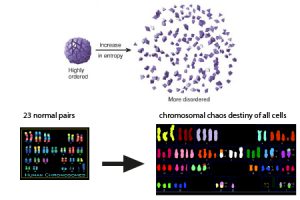 Yesterday, I enjoyed a 90-minute conversation with an engineer and first time patient who has been wanting to try TA-65 for years. We chatted about the problem of dogma in history, economics, and scientific dogma. I realized that there are many people who move easily through topics because as Kant defined illumination, some of us have outgrown a need to not sound stupid as I blogged about recently.

So today, I write a short blog about how dogma about cancer aneuploidy (or the wrong number of chromosomes) missed the most obvious insight imaginable. I was able to guess it without any fancy lab or publications to my name; how did they miss it?

Let us first agree that a body is a machine in turn made up of trillions of cellular machines, all exhibiting decreasing genomic integrity and stability as we age. Here are some insights which help to explain aging as the result of increasing entropy (or disorder):

What is entropy? It is the disorder of system which we are told increases unless there is a reversible reaction. Since typographical errors and mutation are not reversible, the entropy of the system will increase and so we age and get ill. Someday, we will embrace stem cell extraction, grading and classification, autologous infusion after clonal expansion (without cryopreservation and thawing to introduce unknown unknown changes.)

Returning to the cancer aneuplody dogma, I am genuinely astounded by this quote from a Harvard team who finally questioned whether common chromosome mutations could be causally and not just casually related:

For more than 100 years, researchers have been unable to explain why cancer cells contain abnormal numbers of chromosomes, a phenomenon known as aneuploidy. Many believed aneuploidy was simply a random byproduct of cancer.

The reason that I was able to intuitively happen upon the unified theory of telomere erosion in stem cells as the common cause in aging and most diseases is that I approached the question with a beginner’s mind and no fixed dogma. For more that 100 years, people just assumed that cancer caused aneuploidy instead of vice versa. This is an error on par with believing that the chicken came before the egg when eggs existed for long before chickens (duh).

The fancy Harvard brainiacs, like the egghead played by Jeff Goldblum in Jurassic Park, evoke “chaos theory” and machine models when all they needed to do was read my book, Telomere Timebombs: Defusing the Terror of Aging to understand how telomere shortening drives the process of chromosomal mutation. This in turn leads to cell dysfunction, cell death, and very rarely, cancer. The geniuses declare what should have been really obvious for 100 years:

“Aneuploidy is driving cancer, not simply a consequence of it,” said Elledge. “Other things also matter, such as gene mutations, rearrangements and changes in expression. We don’t know what the weighting is, but now we should be able to figure it out”

Here are the only two pictures you need to understand the process: Dogma tells us that there are many possible explanations for cancer, aging, and disease; I believe there is really only one. True wisdom comes when you realize that this telomere shortening, mutation of chromosomes, and cell death is morally neutral and enables both efficiency of our machine and extreme longevity. Non-stem cells all mutate and die off in this way. But even stem cells usually kill themselves after they mutate in this manner. So, cancer is not as rare or robust as we might think; it is actually a potentiality enabled by weak immunity and a very rare set of circumstances both within the affected stem cell and amidst the host milieu.