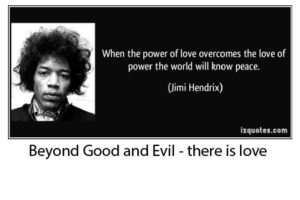 What is good? What is evil? It all depends on your perspective, I suppose.

A good day for the lion is surely and evil one for the lamb. A lie told that saves your family but ends the lives of others will usually be viewed as a virtuous act. In the end, if we are to be honest about what motivates people, perhaps we should be honest about the inability of any of us to judge the confusion of our fellow hominids in these times of polarization, fear, and perceived scarcity.

It is interesting that I saw an article on Facebook about AI being able to distribute resources more fairly, which was a central tenet of my plan to “save the world” and win $5M dollars.

Well at least one of my acquaintances, Yale Professor Paul Bloom, won $1M dollars this month for his work including his book, Against Empathy, that I blogged about here.

Because humans are so easily manipulated by FUD (fear, uncertainly, and doubt) as well as Fake News, perhaps we can skip a Blockchain world of mutually distrustful, decentralized information and just move on to a world where we gradually cede control of fairness and evil/good to rational machines with human plaintiffs?

As Americans, we don’t strongly question our government’s right to have my troops in 80 countries, to change regimes, to frequently cause mayhem, and to rewrite the Constitution to serve corporate interests. Perhaps the day will come when most of humanity’s tax revenue will be deployed as we see fit and subject to audit? Perhaps there will come a day when the disintegrating nation states are rendered irrelevant as basic utilities and safety under the law will be secured?

In any system established by oligarchy and human self-interest, there will always be gamesmanship and narratives that are morally and factually ambigious. If we are to cooperate in a peaceful, transparent, and just world, perhaps we need machines without empathy but rather factual algorithms, to help us play fairly. I refer you back to my proposal to save the world.

It is synchronistic that just as I felt compelled to write about the JFK assassination and Andy Kaufman, the events at the Harvest91 Music Festival at the Mandalay Bay were unfolding. Allegedly, the CIA file on Lee Harvey Oswald has now gone missing, which is perhaps not surprising given even a 1976 Congressional Select Committee concluded there was likely a conspiracy although they did not implicate the CIA. Likewise, there are countless aspects of the Vegas narrative that are bewildering leading some people to suggest alternative explanations. To them, I would say, Cui bono? and perhaps…follow the money.

In the end, I don’t believe anyone feels they are ever on the wrong side of history until they are brought before a show trial or forced confession. During Paul Bloom’s lecture at Renaissance Weekend, he brought up a quote that when imprisoned Nazi and founder of the Gestapo, Hermann Goering, was awaiting trial at Nuremberg, he learned that his priceless Vermeer’s were forgeries, and an observer commented (paraphrasing) “it was as if he had just learned that there was true evil in the world.”

If we are to usher in a world where the wolf lays down with the lamb, we may need to abrogate some of the resource allocation and decision making capacity to machines without the perception of evil and good, which are so subjective as to be ultimately impotent to guide us towards a future of peaceful cohabitation.

Catalans now battle police to leave Spain, California wants to leave the USA, the Saudi’s want to sell oil in Euros and Yuan, and even my friend, Jim Kim, the president of the World Bank, is talking about digital currencies. We live in interesting times as globalism disintegrates and mere anarchy is loosed upon the world. But perhaps the revelation at hand is not Yeats’ apocalypse but rather a peaceful transition as the Lion of Judah reads the scroll and enthrones the lamb of peace upon the throne. Perhaps the meek shall inherit the earth if AI is allowed to say what is fair what is not and the technologies of abundance and peace are allowed to flourish.

If you think we have it bad now, think of what prompted German Beethoven to write Eroica in honor of a conquering Napoleon. For most of human history, most humans have served as chattel at the whim of Dukes in thousands of Duchies such as those in the Holy Roman Empire that the Bonaparte vanquished. From family, religion, nation-state, ethnic affiliation, and even species-level bias, we seem unable to free ourselves from mental slavery without a little help from an agreed-upon system of rules administered by non-empathic, non-tribal, machine intelligence.

We don’t live in a bipolar world of good and evil or dark versus light. We live in a omnipolar world with various pockets of ignorance, prosperity, and love consciousness. As long as tribal stories and fear-based emotions are effective means to separate us, the world will not know peace. Just as cold is a relative absence of heat, not its opposite, there are only varying degrees of love and light which we actively suppress as we pretend to sleep. Let us seek to raise the scalar properties of peace, love and understanding. As the prophet Elvis Costello once asked rhetorically, what is so funny about that? Keep your spirits high, my friends. Out of chaos, comes a new and higher order.