Let’s hear it for the ladies! 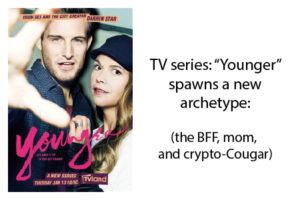 I would like to recommend the TV show, Younger, for its new take on telling women’s stories. I just finished my binge-watching of all 3 1/2 seasons and I have to salute this latest Darren Star show as a triumph of intersectional feminist art. Star brought us many TV zeitgeists as the creator of Melrose Place, Beverly Hills 90210, and Sex and the City. Although his tastes are clearly set among the backdrop of the affluent, jet-set class and their somewhat unrelatable problems, Younger takes an interesting premise and manages to explore it in fresh and emotionally logical ways.

In it, the heroine is a divorcing 40-yo mother of a college girl who cannot find a job in publishing despite talent, drive, and a promising career in her 20s cut short by motherhood and a suburban life in New Jersey. She finds herself bankrupt and desperate enough to lie about her age and manages to pull it off – everyone except her Brooklyn-based friend/roommate, remains in the dark about her secret. She ends of falling in love with a sexy 26-yo tattoo artist in Brooklyn despite being drawn to her dashing boss, the owner-proprietor of the publishing company in which she works.

The fish-out-of-water high jinks that ensue are set against the backdrop of New York haute couture, the fast-paced publishing world, and a gentrified Brooklyn. As such, they reference pop culture movements such as Marie Kondo’s decluttering, Game of Thrones, and sub-genres of supernatural “chick-lit” using wry social media references and a good deal of hilarious texting in the storytelling. Seeing the 26-yo boss of Liza privately ridicule the incognito 40-yo for incorrectly explaining what a meme is to other credulous older people is pretty funny stuff.

What transcends other previous modes of story telling is that while it does indulge in a bit of reparations for male sexism by making the male characters a bit two-dimensional, it deftly explores the themes of ageism from a decidedly female perspective. Women are unfaithful to their partners, yet supportive of each other, and they generally act as post-feminist and fully empowered people. The show’s themes, references, and storytelling is comically (never tragically) hip. To my sensibilities, that was a line that Sex and the City blurred as the archetypes of the four women in that successful franchise were all a bit trop and caricatured for me. I found it interesting that just prior to breaking up with her tattoo-artist boyfriend, the central character, Liza Miller, receives a tattoo with an hourglass on its side, reminiscent of the hourglass being rotated in my Recharge Biomedical logo.

In the interstices and subtext of this wonderfully-executed ensemble comedy are some pretty heavy themes, dealt with with humanity and rich artistry.

What we feel from all the women in the story is just how deep the drive to couple with men (and women) is, how women yearn to support each other, and how central the need to find meaning in careers inside and outside the home are. We find that the heroine’s journey is one of not relying on the all-too-human and disappointing men in their lives but that one should never give up the quest for the HEA (happy ever after).

Of course, the central problem with female biology is one determined by ovulation. The reproductive years place conflicting stresses upon a woman to advance professionally while also nurturing children if she so desires. When I began hearing women in their 50s and even 60s were occasionally ovulating on a telomerase activator, it made me realize that reversible telomere erosion and replicative senescence was probably at the core of both menopause and decreasing reproductive capacity that becomes quite troublesome as early as a woman’s late 30s.

When I trained in OB-GYN in the 1990s, women didn’t have the option to preserve their eggs that they now have. Regrettably, this option is more expensive and not as reliable as embryo preservation but it takes the pressure off of a woman from having to choose an anonymous, non-life partner as a donor. It is widely offered and embraced by young women wanting to keep their professional trajectories intact but they should be careful what they wish for. Having children in your 40s, even with a surrogate and childcare assistance, may still not be a great choice unless and until the youth and vitality of the woman is also extended.

I recently was talking with a friend who is a 33yo woman with a strong career path and ambitions who asked me about egg cryo-preservation as an option. When the conversation turned to picking a mate, she told me I was the first person, male or female, to ever recommend that she find a husband who was significantly younger than she. I explained that some of the most successful marriages I had seen were with friends in whom there was at least a ten year difference between husband and wife. This configuration allows a women to nurture a bright and ambitious man and also find a partner with the vim and vigor to share child rearing as well as connubial duties far beyond the expiration dates of those that went the traditional route and married older. Most women only have the reproductive span to go around once whereas men can always remarry and in fact, my children go to school with a family that is the third iteration of “married with kids” for one gentleman.

So let’s hear it for the women who resolutely face the challenges of balancing reproductive capacity, career, freedom, and having to tolerate men. Watch Younger and enjoy a fresh, funny, and fabulous telling of their stories.

To learn more about female fertility and its decline, read this blog.

P.S. If you are a relative newcomer to the term “intersectional feminism” you may find this video funny. If you are not, I hope you find it hilarious:

This week, there was a hullabaloo raised when the female New Zealand labour leader running for Prime Minister was asked if she planned to have children. I found it refreshing that one guest, who happened to be female, was willing to discuss the different choices that women make in the workplace on an NPR call in show, instead of falling back on the “you would never ask that of a man” shouting point. To fight against gender discrimination in the workplace shouldn’t mean you have to deny the biological exigencies of womanhood.