Who killed the Kennedy’s? After all…it was you and me 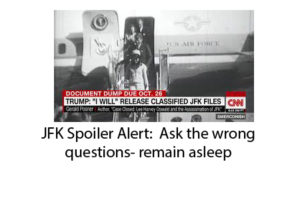 Tomorrow, the JFK assassination files that were slated 25 years ago to be declassified, will be released. And nothing will change overnight, but perhaps slowly people will reexamine their complicity in creating the America we have lived in since then.

Here is the problem: we think in binary opposites and that is not how the world works. Read this blog to understand more. Nobody is right all the time, including government agencies, our parents, and ourselves. We need to get away from Newtonian, dualistic truth. People lie, they make mistakes, and they use their minds, not their heart-based intuition, to trust beyond what is reasonable.

I was reminded of the need to maintain equilibrium and integrity today when a very prominent thought leader and entrepreneur declined to endorse my book.

Thanks Ed! You made some valid points in the vitamin chapter for sure…focusing the message on cellular and genomic is a more positive message that won’t get the entire book rejected by much of the functional medicine community who don’t resonate with the harsh tones…saying cell function trumps any vitamin you could take would be supported by all. Saying that many vitamins don’t work and why would be supported by all. Saying that herbs work better than vitamins would be supported by some (including me). But lumping them all together isn’t going to pass the “sniff test” of the average practitioner…and you’ve got to get this tone right for your book to break out!

This was my reply:

Thanks for the thoughtful feedback! I don’t disagree with your characterization of my tone but at the heart of it, being a hopeful skeptic is sort of my brand.

There is much that I don’t know and for that reason, I just wanted to write a book about what I do know. I am constantly being educated about supplements and I am quite sure that in certain cases, used properly, they can be helpful. I will leave it to greater minds like yours to carry that burden. My experience is with cycloastrogenol and hormones. I hope someday we will have the ability to understand and precisely ameliorate other classes of supplements for personal health. Returning to JFK, there is a long history of the CIA available hidden in plain sight and I have to accuse all of us in being complicit in trading truth, justice, and the American Way for propaganda, rationalization, and a police state. Did the CIA kill JFK? Of course not. Did a few people aligned with the CIA have some role in the lead-up and aftermath? Less clear if you consider motive, opportunity, and who benefited.

We are all brainwash victims but in this age of the internet, the ability to remain asleep to the workings of our Republic is not only impossible, it is a choice. How is it that congressmen were surprised to learn about 1,000 troops in Niger when they have the sole Constitutional mandate of waging war? And if the elected officials all the way up to the Commander-in-Chief don’t really know why we have US soldiers in 150 of the 195 countries of the world, then who does?
Here is the logic by which we survive, like children of a cult leader:
1) we are a good country engaged in altruism and establishing order.
2) when we are found to start wars on false pretexts that is the fault of well-meaning people and we were misled.
3) Our leaders cannot be morally compromised by bribery or blackmail to the point that they would lie, cheat, steal, and murder.
4) Common sense, an independent press and judiciary, and human morality makes conspiracy theories ridiculous to consider.

11.23.1963 to 10.25.2017 –was a time “While America Slept” to paraphrase JFK’s book While England Slept. JFK didn’t agree with his father, the US Ambassador to Great Britain, regarding the latter’s appeasement of the Nazis. I guess only the good die young. I submit that there are few people who truly believe that Lee Harvey Oswald acted alone yet we all pretend to sleep, too afraid to live with ambiguity and follow the Mad Hatter down the rabbit holes.

I can make a very cogent argument for why CIA operations have brought order and prosperity to the American Empire and if you believe the ends justify the means, then you will continue to sleep well at night as the Deep State, described by Bill Moyers, continues to spend the lion’s share of your tax revenue.

As the Petrodollar regime disintegrates, we live in dangerous time. A rift between CIA and MI-6 just emerged, which may belie some erosion of trust. It seems that all agencies have leakers, dissenters, and factions after all.

I believe it is a bit disingenuous for so many people to act surprised about the Harvey Weinstein revelations. I recall Larry Gelbart, creator and producer of M.A.S.H, who quipped to our screenwriting group that “Hollywood is still just about two things: rich men and beautiful young women.” Well something similar could be said about Washington, D.C. – is anyone shocked to discover that wars are waged for profit? Perhaps you should read about the Business Plot, an alleged fascist American Coup against FDR planned by captains of industry revealed by Gen Smedley Butler, the author of War is a Racket.

Will US citizens ever question the black budgets towards “defense and intelligence”? If so, we might survive a multi-polar world with our principles intact. We remain the most powerful military force in the world but as our allies realign, our ability to manipulate the world using force, puppet regimes, international governance, and information control will have to adapt.

Perhaps questioning the motives for JFK’s assassination will begin a historiograpical deconstruction of Stockholm Syndrome story we have told ourselves since then. Perhaps We, The People, will seek to reestablish the Republic according to The Constitution and the rule of law. When intelligence, government, and lobbyists function outside and above the law, it’s time to wake up from history, as the song, “Right Here, Right Now” by Jesus Jones, suggests:

[youtube https://www.youtube.com/watch?v=lwpjsToHzAE]
A woman on the radio talked about revolution
when it’s already passed her by
Bob Dylan didn’t have this to sing about
you know it feels good to be alive

I saw the decade in, when it seemed
the world could change at the blink of an eye
And if anything
then there’s your sign of the times